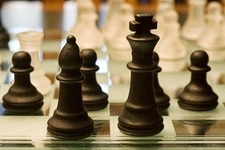 Mind Sports were among activities receiving recognition at the Spirit of Sport Awards last week.

The Spirit of Sport Awards were created by the Sport Accord Council in 2002 to commend the commitment and humanitarian spirit of Sport Accord members who have made an exceptional and lasting contribution to using sport as a tool for positive social change.

As detailed on the SportAccord website: “the project aims for the intellectual development of children and youth enrolled in regular public schools; enables children and teenagers from risky areas to have access to social inclusion; provides inmates rehabilitation in prisons through the change of attitude; and enables the practice of an alternative sport and activities in the treatment of chemical addicted persons.”

For more details on the Spirit of Sport Awards, visit the Sport Accord website.

The first experience that many children have of Mind Sports is in a school chess club. Competing against friends can be fun, as well as educational, and can provide a welcome taste of competition to children who may not excel on the sports field. Thinking tactically and using skill to outplay an opponent can be as enjoyable as scoring goals on the football pitch.

So with chess being such a regular feature in young people’s development, could poker too be a part of that curriculum?

As the Wall Street Journal reported this week, it’s a theory already expounded by one school in New York. The Henry Street High School on the Lower East side of Manhattan has been running a poker club since 2007, encouraging students to develop not only their math and psychology skills, but also to develop character, which they have gone on to use after graduation. It has delighted their school principle but also the likes of Harvard Law Professor Charles Nesson, who is planning to teach poker strategy alongside case law.

Of course the obstacles to poker in schools are many. While the IFP works to direct the image of poker away from the sleazy smoke-filled back rooms, towards the more intellectual (and accurate) mind sport that requires talent and skill. Poker is still in the throes of shrugging off this misconception but it’s a picture that needs to be redrawn as poker enters a new era.

Not only is poker a game that can be played by anyone, regardless of age or gender, for fun against family and friends or simply against others who share a passion for the game. More significantly money is not a pre-requisite and the chips you play with can be worth nothing other than points or simple bragging rights. Millions around the world already play like this, not for money, just for fun.

With this in mind is it so far-fetched to think poker may, like chess, be an activity high school students could engage in, finding a source of valuable life lessons, as demonstrated in Henry Street High School? It would appear the leap of faith is not such a leap after all, merely a step.

Spain has been in the headlines of the poker world this week as the government granted a series of new licenses to operators across the country.

Among the companies awarded eGaming licenses were the likes of Bwin, 888, SportingBet and PokerStars, all of which will be offering online poker games to Spanish players. In the case of PokerStars it is one of several individual licenses that have been obtained across various markets in Europe. Their Spanish only site came into operation yesterday.

They are the first to be welcomed into the new regulated market which allows licensed operators to host online poker for Spanish residents who can only compete against other Spanish players. However, there remains some contention amid the poker community, with issues of tax and other details still to be remedied, issues that have alienated many players.

The International Federation of Poker is not an arbiter of the game, and while IFP España supports market regulation they argue that a common regulation for global poker should remain the ultimate goal.

“IFP España is an organisation that is working for the recognition of Poker as a Mind Sport, as it has been accepted in other countries,” said IFP España President Juan Manuel Pastor. “We aim to have the same rights and obligations as any sporting federation, and to defend our members. We will do everything possible – within the limit of our powers, resources and the framework of the law – to support Spanish players and we hope that very soon our sport can be accessible to all the world without restrictions.”

Led by Professor Charles Nesson, the event entitled “Bringing Mindsports into the Classroom and Beyond: A Workshop on Curriculum Design and Civic Education”, brings together competitors, leading game masters, scholars, researchers, students, and others to discuss the potential of ‘strategic games’ and ‘games of skill’, such as chess and poker, on educational practices and venues, including schools and libraries.Also participating, in what is the first event of its kind, are members of the Harvard Law School Library, the Berkman Center for Internet & Society, and the MIT Media Lab, as well as representatives of the United States Mindsport Association.

At the heart of the workshop will be a focus on developing a curriculum for use in a variety of school settings, as well as the associated online tools and resources employed to achieve that. These include customizable syllabi, tutorials with masters, innovative teaching as well as guidance to teachers and librarians on exactly how to implement mind sports in the classroom.

Participants will be asked to consider where the notion of being a strategic thinker, and a ‘player in the game’ can inform and transform understandings of citizen engagement. The effects this could have on a curriculum are sizable, geared towards learners in both traditional and non-traditional settings.

To that end, the resulting curriculum will be geared towards learners in traditional and non-traditional venues, including classrooms, libraries, and other centers of civic engagement and learning, with the goal of teaching and enhancing the principles and practice of active citizenry.