Voters go to the polling stations tomorrow across the United States to either re-elect their President, or to select a new one. But how much will be changed on poker’s political front with Barrack Obama or Mitt Romney in the White House?

An article on the Pocket Fives website seeks to answer that question, analysing each candidate for their positions on poker and what effect their success might have to the future of the game.

The result, as you can see on the Pocket Fives website, is hardly inspiring, unless you consider the chance of a libertarian landslide a possibility. But regardless of which candidate wins, the political landscape is likely to change and the effects of that will be significant.

Read the full article on the Pocket Fives website.

Poker legend Doyle Brunson announced on Twitter that he had been diagnosed with cancer. However, he emphasized that his condition is thought to be treatable.

“It was malignant. 4 times I have heard that in my life. Chilling way to start the day. Squamas cell cancer, nothing to worry about.#yeahright”

“Tx 4 the support about the cancer. It’s a slow growth type that is usually ok But it’s something you had rather not hear. #beentheredonethat”

Squamous-cell cancer can develop in various part of the body but is commonly found on the skin, being the second most common form of skin cancer. Fortunately, of the 200,000 cases reported each year, the vast majority of patients have a good prognosis.

Remarkably Brunson has been diagnosed with cancer four times in his life, detailed in his book Super System 2.

In 1962, months after his marriage to his wife Louise, Brunson had a benign tumour removed from his neck, only for surgeons to discover that cancer had spread throughout his body. Their prognosis was that he had just months to live.

With his wife pregnant, Brunson underwent radical surgery with the hope that it would prolong his life long enough to hold his first child. But during the surgery doctors were unable to find any trace of cancer in his body.

“The odds against merely surviving the operation itself were very high. A month earlier the black corruption of melanoma had been visible to the naked eye. That the cancer had disappeared was incomprehensible to the staff at the hospital. Five doctors had unanimously agreed that it was a medical impossibility for me to live longer than a few more months, with or without the operation.”

Of his ten bracelets two were earned in the main event, which he won in both 1976 and 1977. He missed out on a third main event title in 1980, finishing runner up to Stu Ungar.

Qualification for the European Nations Cup 2013 will begin in Austria next month, ahead of the finals which will take place in London in the spring of 2013.

The qualifying event, which will be staged in Montesino, Vienna from 7 to 9 December, will feature 18 national teams in a Match Poker format, with the top nations will progress to ENC 2013. So far 12 teams from National Federations have enlisted, leaving six spots open in the run up to next month.

That means there is still time for IFP member federations to book their place for what is expected to be a grueling few days of Match poker, a variant first used at the Nations Cup in London last year, which will be used throughout the contest.

Match Poker (formerly duplicate poker) was pioneered by IFP and provides the truest test of poker as a Mind Sport.

In Match Poker the same order of cards is used at all tables. Every player in a given seat position receives exactly the same cards as his fellow competitors in that seat position on other tables, meaning their skill in playing these hands determines their finishing position. It’s an innovative way of reducing random chance, where the quality of the cards a player receives does not influence their chance to win the tournament.

Last year it made for a thrilling spectacle, as the Nations Cup played out in the pods of the EDF Energy London Eye and in London’s County Hall, a tournament that was eventually won by Team Germany.

The road to the next finals is now about to begin. Check back on the IFP website for more details of the event in the coming weeks. 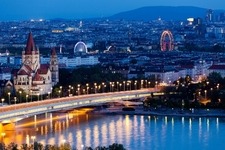 The news that qualification for the 2013 European Nations Cup is just weeks away will be welcomed by many who enjoyed what was a unique spectacle at County Hall back in 2011, including players and fans of the game alike.

The qualification tournament, organized by IFP and hosted by the Austrian Poker sport Association (APSA), will feature 18 teams competing for one of ten spots at the European Nations Cup in 2013, to be played in London.

So far they include hosts Austria, Bosnia & Herzegovina, Bulgaria, Cyprus, Estonia, Hungary, Lithuania, Poland, Serbia, Macedonia and Hungary. The remaining seven spots will be filled in the coming weeks.

The three day tournament starts on 7 December at Montesino, the perfect venue for an event of its kind given its recent history of high profile competitions.

The card room has hosted the crowning of various champions over the years, most recently Morten Christensen in the first World Poker Tour event to be played on Austrian soil, and Scott Seiver, who won the Party Poker Premier League Poker V when it played out in the capital in April of this year.

The ENC Qualifiers follow them, the first major Match Poker event to be dealt there, with a place at the London finals at stake. Check back on the IFP website for more details in the coming weeks.

The annual Congress of International Federation of Poker proved has proved a triumph in Lviv, Ukraine.Delegates from some 30 countries left Lviv yesterday after achieving all they had hoped at the fourth annual congress of IFP. Hosted at his city-centre British Club by well-known local figure Gary Bowman, a board member of IFP, the three-day Congress focused on the exciting future ahead of this dynamic new international sports federation.

The Congress enjoyed detailed presentations on the online membership platform which IFP plans to launch next year. The IFP board also met with its marketing partner, Mind Sports Partners, to discuss details of the membership offer designed to attract a global community of poker players who enjoy poker purely for the love of the game, with no money involved.

“With an estimated 300 million players worldwide, IFP consolidated its plans for a very exciting future after growing to its present strength in only three years since its foundation in Lausanne,” said IFP President Anthony Holden. “This has been a historic weekend in the history the Mind Sport we all love,” added IFP’s host, Gary Bowman, referring to IFP’s membership of the International Mind Sports Association (IMSA).

Delegates also heard details of IFP’s next event, the European Nations Cup, to be staged in March after a qualifying tournament in Vienna next month. This event uses IFP’s patent Match Poker (a version of duplicate poker) where the same hands are dealt simultaneously at all tables to ensure that skill prevails over chance.

Master of Ceremonies at the Congress was Patrick Nally, the “founding father of sports marketing”, who has built IFP to its current strength of almost 50 member-nations worldwide. The Congress also enjoyed a lavish banquet with music, dancing and celebration after its day-long deliberations, which Patrick Nally saw as “a symbol of the unity and strength of IFP”.

“IFP is very grateful to Gary Bowman for his generous hospitality,” said Holden. “This weekend in Lviv will go down in poker history as a milestone in the growth of this vibrant Federation.”