They were instrumental in introducing poker to thousands of players, even before the internet changed the game forever. Now it seems three of poker’s most esteemed authors have played a not insignificant part in one of the most important legal rulings in the game’s history.

Earlier this month Senior US District Judge Jack B Weinstein dismissed an indictment against Lawrence DiCristina who was charged with operating an illegal poker game, in violation of the Illegal Gambling Business Act of 1955.

The defence argued that poker was in fact a game of skill, backed by the findings of Dr Randall Heeb, and therefore exempt from the bill. Judge Weinstein agreed.

The 120 page ruling, which makes for compelling reading, presents the entire case, including the welcome case that skill plays a key part in the amount of money won or lost in a poker hand. Emphasising key points, it also refers to excerpts of three books which have become classics of the poker cannon, those of Anthony Holden, Jim McManus, and Al Alvarez.

Bigger Deal: A Year Inside the Poker Boom in which Holden, President of the IFP, recounts his year on the poker circuit amid the online poker boom, was referenced in part to explain just how significant internet poker had become by 2006. That year some 44,500 players took part in that summer’s World Series of Poker.

In Cowboys Full: The Story of Poker, McManus, an IFP Ambassador, added a further layer of legitimacy to the case, describing how past presidents, politicians and public figures have been poker players – far from the seedy underworld of illegal gambling.

There was also reference to Al Alvarez’s 1983 masterpiece The Biggest Game in Town, in which Alvarez described how poker players bet on their own skills, in contrast to sports bettors who put their faith in the skill of others.

The document is well worth the read, if not for the legal jargon then the simple fact that it has a happy ending. Judge Weinstein’s ruling could prove to be a turning point in the game. If that proves true the likes of Holden, McManus and Alvarez will have played a small but crucial part.

Could lavender oil be the secret to poker success? If the English Bridge team at the recent World Mind Game in Lille, France, are anything to go by, then the answer is yes.

An article in the British Daily Mail newspaper detailed how a dab of lavender oil helped the six-strong England team win the gold medal, defending their title from Beijing in 2008, while sparking what could be competitive sport’s most genteel row concerning substance use.

Heather Dhondy, 46, Nevena Senior, 52, Nicola Smith, 63, Sally Brock, 58, Susan Stockdale, 29, and Fiona Brown, 27, defeated the Russian team in a final match of the competition which lasted two days. Of course it was not just lavender oil that helped them to victory, but extended period of practice, training and a strict diet to combat the long hours of competitive play at the Games.

Lavender oil is known for its calming effects in times of stress. However, as they had previously found in a match against France in May during the European Championships, it’s not always welcomed by opponents.

“We dab ourselves with drops of lavender oil before every match,” said Dhondy. “It is supposed to calm the nerves and improve concentration – and it sometimes annoys our opponents. They don’t seem to like the smell very much.”

In one incident, a team member overheard the French team comparing the smell to toilet cleaner.

“I don’t know for sure if it put them off,” said Smith, “but the moment she started complaining about the smell I knew we had the upper hand.”

Either way, England went on to win the European title and now have WMG gold to add to their records. They have no plans on giving up, or sharing their secret weapon.

“Sally, my partner on the bridge team, once tried to offer some to an opponent,” said Smith. “I immediately threatened to “divorce” her if she gave our lavender oil to the opposition. We don’t want the rest of the world using it.”

Read the full article on the Daily Mail website.

For mind sport connoisseurs it’s one of the highlights of the year, where the most talented competitors in each discipline meet to win one of the mind sport’s most coveted prize, a champion’s medal.

But even when the Games come to an end next week, it will not be the end of play, with SportAccord planning their own online version of its Games later this year.

The 2012 World Mind Games online tournament will aim to attract the some 300,000 participants who took part in the successful first event of its kind in 2011.

Tournaments in each sport, backed by their member federations and the International Mind Sport Association, will take place in September and October and will be played on the major online platforms. With categories devised based on skill level, organisers also hope to attract younger players, as well as those who compete in universities.

It could prove to be a pivotal time for Cypriot poker, with the courts on the Mediterranean island examining the case for legalized poker which could eventually overturn current legislation outlawing the game.

At a press conference on Thursday, the Cyprus Poker Association (CPA), which had national trials for the 2012 IFP Nations Cup interrupted by police last month, presented their case to the press, fully backed by the International Federation of Poker.The arguments in favour of legalised poker are persuasive: approximately 800 million players around the world, a game used in the world’s most respected educational centres such as Harvard University, increasingly successful poker tours such as the European and World Poker Tours, and the IFPs membership of the International Mind Sport Association.However, the case for legal poker is not always as straightforward as it should be.

Tony Theophanides, a tireless and spirited advocate for poker in Cyprus, has been instrumental in poker’s defence, despite inevitable frustrations.

In a statement in support of the CPA, IFP President Anthony Holden was explicit in his backing of poker players in Cyprus, outlining the various arguments while being critical of Cypriot authorities who claimed that national trials constituted illegal gambling.

“Players take part for the love of the game, not for financial gain,” said Holden. “There is no money involved, so it is hard to see how this could remotely be described as gambling.

“IFP exists to demonstrate that poker is a Mind Sport of strategic skill – like chess, bridge, draughts etc., IFP’s fellow-members of the International Mind Sports Association,” he added.

“On the BBC only this week, there has been a call for these Mind Sports to be included in future Olympic Games. This has since publicly received parliamentary support. Poker is now second only to football in terms of global popularity.

“As President of IFP, I urge all concerned to support the Cyprus Poker Association in its perfectly legal and respectable activities. We look forward to welcoming the CPA’s team to our events, and wish to express our unqualified support for CPA and its dynamic vice-president, Tony Theophanides.”

The case continues in Cyprus, although Theophanides is determined to fight for the rights of poker players until successful.

“As we said before,” said Theophanides, “this is one fight that we will not lose.” 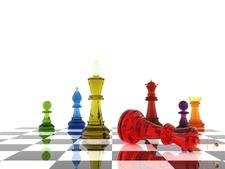 A fascinating article in the Christian Science Monitor poses the question: should chess be in the Olympic Games?

As the article by Lisa Suhay states, chess has a legitimate claim, this being the 85th anniversary of the game being an officially recognised body of sport by the International Olympic Committee. In 1924 chess nearly became part of the Paris Games, the only hurdle being the distinction between professional and amateur competitors. Instead, the World Chess Olympiad was born in 1927.

A self-confessed “chess parent”, Suhay rightly states that chess has all the features that not only make for great competition, but which please parents. Mind sports such as chess (and poker) exercise the mind with tactics, critical thinking and mental agility. It’s something not lost on Suhay who helps organise chess programmes for inner city children

Will we ever see chess in the Olympic Games? The World Chess Olympiad is bigger than the Winter Games in terms of nations competing. Some 160 countries will take part in the next WCO in Istanbul, Turkey, later this month; the youngest competitor aged just ten. There was even an attempt in 2008 to merge the Chess Olympiad with the Beijing Games. Alas, it never came to fruition.

For now the WCO will remain outside events such as those taking place in London, while remaining a spectacle in their own right.
And poker? Will the likes of Phil Hellmuth, Daniel Negreanu and Phil Ivey ever be seen carrying their nation’s flag into the Olympic stadium? For now the debate will continue.

Read the full article on the Christian Science Monitor website.