This event, which used IFP’s new Match Poker technology developed by XpressHD, was something of a coup for Cyprus as it was the first time anyone anywhere has seen playing cards being delivered to players via their individual smartphones. 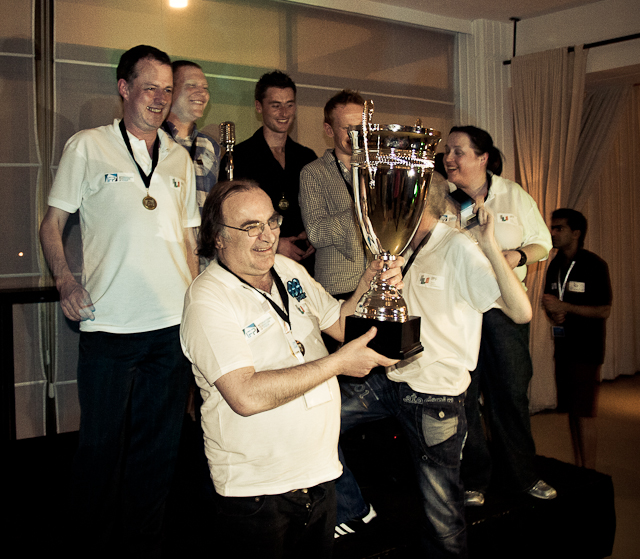 Such was the interest in the event that many countries beyond the 14 competing nations broadcasted the live event stream to follow the action in the wonderful surroundings of the Annabelle Hotel in Paphos. Ireland ended up winning and became the first ever IFP European Nations Cup champion.  Russia, Spain, UK, Estonia and the home nation, Cyprus, all qualified for the IFP Nations Cup 2013 final which will be held in November/December this year. Germany is the defending Nations Cup champion from the inaugural event, which was held in London in 2011.

“Organising an international competition is always a challenge for the host and recent events in Cyprus have made it even more so.” said IFP Board and founder member Patrick Nally. “The fact that we are here today is testament to all the hard work and support of our friends in Cyprus and I would like to take this opportunity, on behalf of IFP, to express our sincere gratitude to the Mayor of Paphos and the Cyprus Poker Association. We are proud to work alongside you to present the first IFP European Nations Cup in Match Poker and to promote poker as a mind sport and game of strategic skill.”

Mayor of Paphos has said “We are delighted to welcome the IFP, the players, the world’s media and the many supporters to Paphos for such a wonderful event. We are also grateful to the Cyprus Poker Association for securing the event for Cyprus.”

Antonis Theophanides of the Cyprus Poker Association has said “We are delighted to be able to host this historical event on behalf of the IFP and bring this radical and innovative approach to the poker playing public. Cyprus has been through a very difficult time recently and this shows the strength of character that we have here to bounce back immediately and host such a prestigious event.”

Anthony Holden steps down as IFP President Scroll to top