Team Ireland have been extremely impressive and their accolades speak for their incredible Match Poker skill:

Winners of the 2013 European Nations Cup in Cyprus

Winners of the 2017 Nations Cup in Oxford

Runners-up of the 2019 Nations Cup in Dublin

Following is the Irish squad for their defence of the European Nations Cup:

Fintan Gavin  – One of the most-decorated players in Irish poker history. Sixth in the all-time money listings having finished Runner-up in the European Poker Tour (EPT) Barcelona Main Event in 2008, won a UKIPT title in 2011, and dozens of more ranking events in his native Ireland. While not at the tables you will find Fintan in the Commentary booth as anchor for English broadcast teams during major festivals including the W.S.O.P.E & the Irish Poker Open.

Karen Muir – She has been an integral part of the Irish Match Poker team since 2017 and helped them to their various titles! Recent M.C.O.P Amsterdam support event champion. 10+ years NLH tournament experience. Regular on the Cash game festival Circuit. Finished top 10 player in her previous 2 Match Poker events.

Johnathen McCullagh – better known as Johny from Ireland’s capital Dublin. “I love to travel to new places and meet new people which me and my partner Giulliana have done a lot of in our 3 years together, I like animals, going to the gym, cooking and tournament poker. My background is on-line MTT’s but I have transitioned to live tournaments in the last few years.”

Giulliana Olivera – Originally from Brazil I live in Ireland with my partner Johny. I’ve been part of the live poker scene coming on 4 years and have had some success including the Partypoker Ladies title in 2017. I like to meet new people travel and shop. I also love animals. To represent Ireland as part of the Match poker team is dream come true.

Team Italy, represented by the Federazione Italiana Gioco Poker (FIGP) will be eager to improve on their 2nd place performance from Oxford at the 2017 Nations Cup. Their team for the European Championships in Kiev is as follows:

Antonio Paolo Parlavecchio, the celebrity of the Italian team, a professional football player in the 90’s with a series of ceded cords after hanging up his boots and losing his hair. He was part of the 2017 Nations Cup team which finished runners-up to the Irish.

Katia Crisafulli, the beautiful part of the team. Everyone bets that it will be the surprise of the impenetrable tournament, the poker face of the team.

Giuseppe Ruggeri is 44 years old and a new entrant into Team Italy. He has been practicing Texas Hold’em since 2006 with excellent results, some of them: 1 in 2012, 5 in vpoker 2019 in Nova Gorica, 2 in Divonne in 350€ in 2019. He is delighted to have been chosen, and hopes with his contribution the team achieves even more prestigious results than those already achieved.

Massimo Majolino is 51 years of age and the old man of the group “at least to the registry office”, sporting from always. From 2006 he has practiced live and online Texas Hold’em, unfortunately now his work commitments rarely allow him time to participate in events. He was part of the 2017 Nations Cup team which finished runners-up to the Irish.

Silvio Pizzarello, poker player, poker coach and Nations Cup 2017 runner up with Team Italy. Actually promoting a bankroll challenge on his Twitch Channel “TheTopTard” playing on 888.it tracking and playing poker through a simulation of a rookie player starting with no bankroll.

Giuseppe Grimaldi, 50, architect with a passion for sport. He has practiced competitive youth and senior activities, in basketball, soccer and volleyball. About ten years ago, thanks to the FIGP, he met “Texas Hold’em live” and soon became one of the protagonists in the world of associations in his region (Sicily). Professional commitments do not allow him constant participation in international tournaments. Nevertheless, it has achieved excellent results by going to ITM frequently. The # 9 place at the “Battle Of Malta 2015” is certainly the most prestigious placement. He was part of the 2017 Nations Cup team which finished runners-up to the Irish.

Mario Sfameni, 49, pharmacist with a passion for Texas Hold’em. Since 2006 he has been attending the Texas Hold’em world first as a live player ($50,000 won in his career) and then as a tournament organiser especially in Malta from 2009 to present. Vice President of F.I.G.P. since 2013 in the IFMP family ready for the spread of Match Poker on the Italian territory. He was part of the 2017 Nations Cup team which finished runners-up to the Irish.

National team of Ukraine participating in the European Nations Cup 2019:

28 years. Professional poker player. SCOOP 2017 winner, runner-up of the Main Event of the EPT Prague 2018. 14th place in the list of most successful Ukrainian players by Hendonmob. Hobbies include Evolutio and football.

30 years. Professional poker player. Poker champion of Ukraine 2018. 55th place in the Main Event of WSOP 2018. Winner of the Nations Cup 2019. His main hobby is football.

Team Germany, represented by the Deutscher Poker Sportbund, have a strong squad of players and analysts ready to prove themselves first at the European Championships in Kiev and then at the Nations Cup Final in Peru!

Born October 03, 1976. Mathematician Stephan Kalhamer is working as a poker coach, strategy consultant, bestselling author, TV presenter and, since 2009, founder and president of Deutscher Poker Sportbund e.V. In 2011 Stephan was coach of the first ever IFMP Nations Cup Champion Germany.

Born February 07, 1981. Project Manager – Lukas plays poker since 2013 and supports poker in Germany in several environments, such as german federation of poker DPSB and poker federation of his home region Nordrhein-Westfalen. Lukas loves to analyse and optimise poker and skills and will support german players to win European Championship in Kiev!

Born January 29, 1982. IT Specialist / electronics technician. Arash plays poker since 2003. He is a poker coach and passionate tournament player. Heads-up is his favourite discipline. He won the Heads Up Live League of the DPSB in 2014 with his team  and became German champion.

Born March 06, 1980. Poker coach and former online cash game pro. After Oxford and Dublin it’s already his third participation in the IFMP Nations Cup in a row. He has prepared extensively for Kiev and is ready for the title fight.

Born May 02, 1980 in Berlin. CEO in his own company and plays poker since 2005. Back in the team since his last appearance in Oxford 2017, ready to play. You can find him at the tournament and cash tables.

Born January 26, 1986. Civil engineer – With highly trained problem solving skills and a passion for solving puzzles it’s probably no wonder, that she found her way to the poker table. She focusses mainly on poker as a mind game and plays in a German club in Hamburg.

Born April 18, 1969. He has been playing poker as a recreational player since 2007. In 2015 he founded the team “Baltic Sea Poker Island Usedom”, which reached the quarter-finals in the playoffs of the Heads Up Live League of the DPSB. His greatest success was the 2nd place at the CPT-LA 2017 in Lennestadt.

Born January 24, 1997. Psychology student. After participating in the Heads Up Live League of the DPSB in 2018 Niklas found his way into Match Poker and was already part of Team Germany in Dublin in the spring. Niklas also plays in a Poker Club in Hamburg.

Born May 31, 1980. graduated in Business Administration, is a business, life and poker coach. He plays poker since 11 years, mostly online cash games but also MTTs and SnGs. He loves discussions, books, videos and quizzes about poker and wants to travel playing all over the world.

Born February 25, 1982. Loves to play all kinds of different poker games since he chose to live in Hamburg ten years ago. Club member of the German Heads-up champions tus Berne Hamburg, plays Heads-up in his own team in the German Championship for 6 consecutive years. His latest passion of playing Match Poker made him take third place in Nations Cup in March with his fellow team members.

Alexander Zholnerchik – born on 25/08/1975, he used to be a businessman, but several years ago came to the conclusion that if business prevents him from playing poker, then he should quit business. And since then Alexander has been passionately playing both online and offline, also being fond of extreme sports, travelling and psychology. 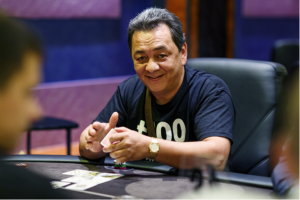 Maryna Khatskevich – She started playing poker in 2014 as a home game with friends. She liked the game because she won and then started playing in the Minsk poker club. It was a cash game. Her first tournament was a Ladies free roll organized by Belarusian Federation of Sports Poker where she took 3rd place and then decided to continue learning poker. She worked a lot on improving her game with trainers and coaches and still does this everyday. Her best tournament result is 4th place in EPT Prague. Now she spends most of her time in poker: playing offline tournaments and working on the game. Her hobby is karaoke and skiing.

Sergej Vladimirov – Born 01.11.1968. Businessman and a proud father of two children. Sergej finds amusement in both active sport arts such as snowboarding and windsurfing, and quiet evenings with closest friends and board games. His life is filled with traveling and adventures. Sergej has been a part of the poker world for more than 10 years and he enjoys Texas Holdem, Omaha and OFC the most.

Yauhen Burlo – 36 years old. Lives and works in Minsk, Belarus. Started playing poker 6 years ago. There are no victories in WSOP and WCOOP, but he believes and does not give up! In his spare time, he enjoys travels, motorcycles, fishing & hunting. Happy man, husband and father.

Mikalai Nikanovich – Born on 16.08.1978. He is a lawyer who loves football, music, old movies and poker. He started playing poker about 7 years ago and is going to Kiev with the slogan: “Who, if not us?”